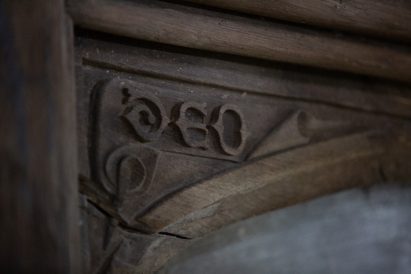 A 500-year-old Tudor servery has been discovered as major conservation work continues at Auckland Castle.

The servery, a pair of large decorated hatches, was revealed in the old kitchen of the former private palace of the Prince Bishops of Durham in Bishop Auckland.

Inscribed with the year of its creation, 1500, when Richard Fox was Bishop of Durham during the reign of Henry VII, it would have been used to pass food from the kitchen to be served in the dining room.

The servery was first discovered during initial conservation work at 900-year-old Auckland Castle in 2017. Now visible as a whole, the servery appears to have been moved in the 1790s. It is intended that the servery will be a feature for visitors to enjoy at Auckland Castle when it re-opens in 2019.