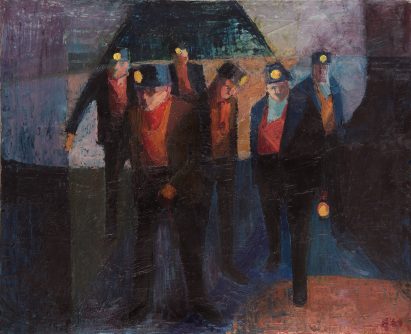 A commemorative exhibition, shining a light on the thousands of forgotten men called up to the coal face during World War II, is opening later this month.

The Bevin Boys – War’s Forgotten Workforce, will launch at the Mining Art Gallery, Bishop Auckland on Wednesday, March 28 2018 and runs until Sunday, 30 September 2018.

It celebrates the efforts of the 48,000 men conscripted to the mines during World War II, whose vital service went unacknowledged for decades.

The temporary exhibition will feature artworks from former Bevin Boys, David McClure, John Tipton, Tom McGuinness and Ted Holloway, as well as original artefacts such as a wage slip of a Bevin Boy.

The exhibition marks 75 years since the launch of the Bevin Boys Scheme and 10 years since Bevin Boys were formally acknowledged with commemorative badges from the UK Government.