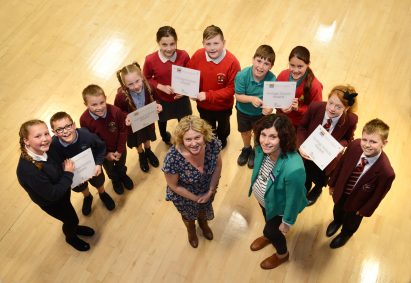 More than 100 County Durham schoolchildren have been using maps, census records and old photographs to uncover the history of their hometown.

Pupils from Cockton Hill Junior School, Toft Hill Primary, Escomb Primary, St Anne’s Primary and St John’s RC School and Sixth Form Centre have spent the past three months trawling the archives to learn what life was like in Bishop Auckland up to 100 years ago.

Supported by Auckland Castle Trust and Historic England as part of the Heritage Schools scheme, each group focussed on separate areas of the town’s heritage, with the results being shared in a special celebration held at Bishop Auckland Town Hall.

The work on show included a film by St John’s School and Sixth Form Centre, who worked with local filmmaker Keith Alexander and theFour Clocks Centre to produce a short video following in the footsteps of a young apprentice from the 19th Century.

This included interviewing relatives of the apprentice, who worked at local engineering firm Lingford and Gardiner’s in 1866.

Their video can be viewed here.