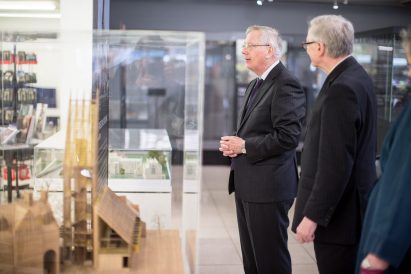 His Royal Highness The Duke of Gloucester has seen first-hand how investment and community spirit is transforming Bishop Auckland.

Guided by Jonathan Ruffer and his wife, Mrs Jane Ruffer, The Duke enjoyed a tour of Auckland Castle, and Bishop Auckland’s changing Market Place, as well as an opportunity to explore some of the £70m revitalisation programme currently being undertaken by Auckland Castle Trust.

This included a look inside the former Old Bank Chambers, which is currently being transformed into a Mining Art Gallery, as well as a chance to view architectural models of the charity’s Future Plans, including the Welcome Building, Walled Garden, Spanish Art Galleryand Faith Museum.

His Royal Highness also visited the Eleven Arches site, home of open air spectacular Kynren – An Epic Tale of England, where he was given a small taste of the live action that attracted more than 100,000 visitors during the show’s first season in 2016.