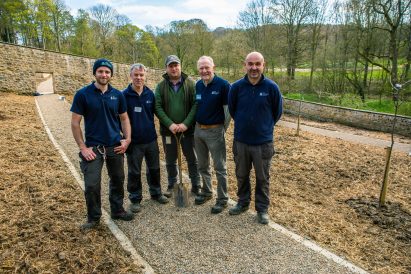 The shoots of change are springing up as a new orchard is planted in one of County Durham’s oldest walled gardens.  More than 20 apple trees have been installed as work to revitalise Bishop Auckland’s 250 year-old Walled Garden continues.

The 17th century garden, in the grounds of Auckland Castle, is being reimagined as both a functioning kitchen garden and a place of beauty as part of The Auckland Project visitor destination.

The new orchard has been planted at the western end of the garden and will produce eating and cooking apples with a range of different provenances, colours and shapes. Staff and volunteers are currently hard at work, propagating hundreds of plants in the Walled Garden’s greenhouses. When ready, they will be temporarily test planted across the site to discover the best location for the many different varieties.

The team has also been using compost created from vegetation across The Auckland Project’s sites and green manure to condition the soil and prepare it for the next stages of the garden’s redevelopment.  Future plans for the garden include planting flowers, herbs and varieties of fruit and vegetables across the lower terrace, creating a beautiful and serene garden for visitors to enjoy. The garden will also supply tasty and locally grown produce for use in The Auckland Project’s cafes and restaurants.

Apprentices and staff from The Auckland Project’s Catering Team will work with the produce grown in the garden to develop new menus, highlighting the region’s growing talents. The Walled Garden was originally created in the grounds of Auckland Castle by Bishop Cosin in the 17th century. It was one of the first in the region to use innovative glass hothouses to grow vegetables, flowers and exotic fruit such as pineapples, which were served to the Bishop’s guests.

Work began on the site in 2017, with local contractor, Rainton Construction Ltd., redefining the garden’s rough contours and repairing its historic walls. Work will continue in the Walled Garden over the coming months, supported by Garfield Weston Foundation and The Headley Trust, with an opening date yet to be announced. Further details about the garden’s design, created by world-class garden designer, Pip Morrison, will also be revealed in due course.