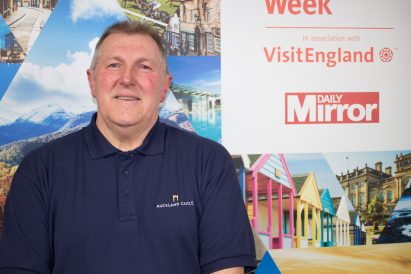 Park Ranger, Alan Anderson is now in the running for a national award – and you could help him win.

Alan, who has worked at Auckland Castle for more than 17 years, is one of 10 finalists across the UK to have been shortlisted for VisitEngland’s Tourism Superstar award 2017.

The winner will now be decided by public vote and, if successful, this would be the third year in a row a Durham entry has claimed the national title.

Alan, who lives in Bishop Auckland, unlocks the gates of Auckland Park every day at 5am – even on Christmas Day – and is out come rain, snow or shine, maintaining 200 acres of ancient parkland and woodland and enhancing the natural habitat of the local wildlife.

As well as tending to the deer park and gardens, the hardworking grandfather also runs school holiday activities, undertakes a wide range of conservation work, and volunteers for additional tasks, including working with visitors and other charity groups.

He was put forward for the national Tourism Superstar award by Visit County Durham after winning the regional competition in 2016 and was nominated by his colleagues in honour of his hardwork, dedication and tireless enthusiasm.

Voting closes on March 29 and the winner will be announced during English Tourism Week, 25 March – 2 April.