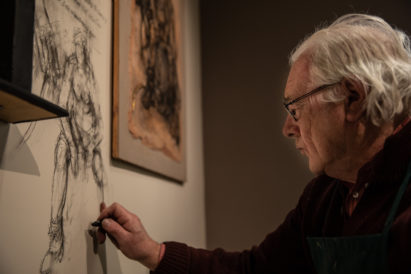 Artist David Venables reflects on his life and work in a new exhibition at the Mining Art Gallery, on show until 12 June.

David Venables: Hewing Out the Image brings together artworks which span seven decades, as the artist approaches the age of 80. From an etching made aged 16, to three new pieces that form the centrepiece of this exhibition.

David has also created an inviting installation within the galleries. The installation offers a glimpse into his studio, where sketches and notes can be found across the walls.

This exhibition is about people, and about family. The paintings document David’s recollections of childhood, and memories of life in the northern mining communities of the 40s and 50s. The subjects of the paintings are, as the artist himself calls them, “my people”.

Though not a coal miner himself, David was born in Haltwhistle, Northumberland, to a family of miners. He grew up within tight-knit mining communities in the North East at a time when opportunities above ground were extremely limited for young working class men.

However, David’s artistic talents attracted an opportunity that he seized with both hands, when he enrolled at Doncaster Arts School at the age of 14. From there he would go to the Central School of Art and Design in London. And although he would become a painter, rather than a hewer, carter or putter like his forebears, his familial roots in the pits have influenced his life’s work.

Coal is a key part of David’s work in more ways than one. The black pigment used within his paintings, is made from ground lumps of coal, by the artist himself. This gives his work both a physical and an emotional link to his heritage.

The exhibition’s title piece is a direct homage to the life he might have led. It is painted in black and presented in a frame with the same dimensions as the cramped and claustrophobic spaces that miners were often expected to work in.

There are also scenes of domestic life, including children playing in the streets, keeping pigeons, and allotments filled with vegetables and chrysanthemums.

“As a child from a working class mining background my life has been that of a journeyman artist whose natural skill has been honed through experience, and that skill and experience has given me the opportunity through the Mining Art Gallery to share with you a little of my work.

“There are memories and images in our life that will conjure up infant, teenager, working, married life and beyond that will give meaning to our endeavours in life. I hope this exhibition will touch those moments.

“Hewing out the Image is a tribute to my family of hewers, drawers, putters; men, women and children and all those who gave their lives to ensure a better life for all in the future.”

The Mining Art Gallery, which explores the art, culture, and context of the mining industry and its place in the history of County Durham, is a natural fit for David’s work. And although this is his first exhibition at the venue, we are proud to have two of his paintings Pit Brow Lasses and Miners‘ Wives as part of our permanent collection.

David Venables: Hewing Out the Image is on show at the Mining Art Gallery, during normal opening hours, until June 12. Book tickets to visit, here.