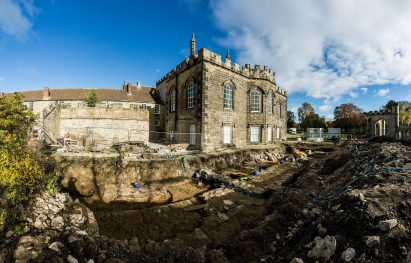 The remains of a long-lost medieval chapel, comparable to some of the greatest in Europe, have been uncovered at Auckland Castle.

The location of a chapel built in the early 1300s for Bishop Bek has remained a mystery since its destruction in the 1650s, following the English Civil War.

Now, following years of archaeological excavations, it  has finally been discovered and the uncovered evidence suggests that it was a vast structure, reaching towards the size of continental chapels such as Sainte-Chapelle in Paris.

The full extent of its spectacular scale will be revealed to the public in a special exhibition at Auckland Castle in March, featuring a reconstruction image of the medieval building alongside finds from the dig.

The team, including archaeologist and volunteers from The Auckland Project and Durham University, will return this summer to continue their excavation of Bek's Chapel.