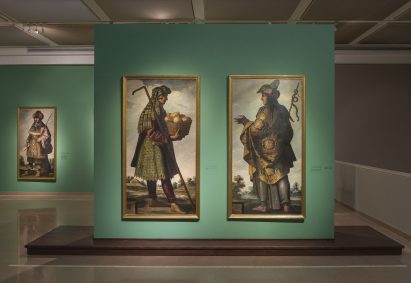 An international spotlight is continuing to shine on County Durham, as Zurbarán’s Jacob and His Twelve Sons go on display in Israel

Francisco de Zurbarán’s life-size paintings of Jacob and His Twelve Sons, which are usually found in Auckland Castle, Bishop Auckland, have spent the past eight months on display in the USA.

Following high profile exhibitions at The Frick Collection, New York and the Meadows Museum, SMU, Dallas, which attracted more than 81,000 people, the paintings have now moved to the Israel Museum, Jerusalem, where they will be shown until 2 October 2018.

The tour forms part of efforts by The Auckland Project, to raise the profile and understanding of Spanish Art, with support from Centro de Estudios Europa Hispánica, Madrid and the Center for Spain in America.

The Israeli exhibition, Jacob and His Twelve Sons: Paintings from Auckland Castle, made possible with support from a number of international donors, marks only the third time the Zurbarán paintings have left Auckland Castle as a complete collection since they were bought by Richard Trevor (Bishop of Durham 1752-1771) in 1756.

Jacob and His Twelve Sons will return home to Auckland Castle later this year.