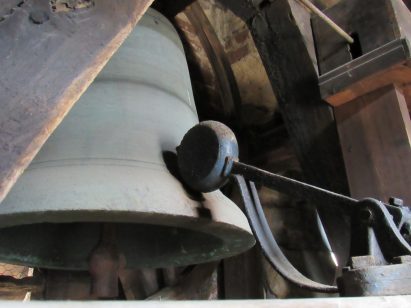 The historical tapestry of Auckland Castle has become even richer following an exciting discovery made during the ongoing restoration of the Clock Tower.

While it had been assumed the clock’s bell had been cast when the Tower was built in the mid-18th century, experts now believe it may have been ringing out across Bishop Auckland for the best part of 1,000 years.

The Clock Tower dates back to around 1760 when Sir Thomas Robinson designed it for Bishop Richard Trevor, but it is now thought the bell can be traced back to the late 12th century – between 1175 and 1200 – around the time Bishop du Puiset was beginning his Great Hall at Auckland Castle (now St Peter’s Chapel).

The discovery means the bell predates not only the Clock Tower, but also the recently uncovered Bek’s Chapel – a long lost medieval chapel from the 14th century associated with Anthony Bek, who was Prince Bishop of Durham from 1284 to 1310.

John Castling, Archaeology and Social History Curator at The Auckland Project, said: “It is absolutely fantastic to have identified just how old and rare the Clock Tower Bell is.

“The possibility that it has hung in earlier buildings at Auckland Castle is hugely exciting and demonstrates the deep and rich history of the site.”

Bell historian, George Dawson, said: “This is a remarkable survivor, the largest bell of its period and has the highly unusual, incised inscription. It deserves to be more well known.”

As well as revealing the bell’s historical significance, Mr Dawson recommended that conservation was needed, as well as modifications to how it is hung and rung, in order to preserve and protect it for future generations.

To this end, the specialist services of expert bell founders John Taylor and Co. of Loughborough – whose own roots can be traced back to the 14th century – were enlisted and the work was recently completed.