All tickets are available on the day at each venue. Booking online is not essential 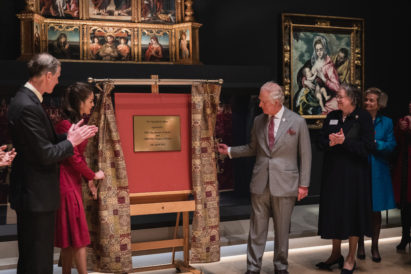 Bishop Auckland's Spanish Gallery officially opened by Her Majesty The Queen of Spain and His Royal Highness The Prince of Wales Tuesday, 5 April 2022

The UK’s first gallery dedicated to the art of the Spanish Golden Age received the Royal seal of approval on Tuesday, 5 April, 2022 as Her Majesty Queen Letizia of Spain, accompanied by HRH The Prince of Wales, officially opened the Spanish Gallery in Bishop Auckland, County Durham.

The Queen of Spain and The Prince of Wales met at Auckland Castle, where they were greeted by The Auckland Project’s Co-founder Jane Ruffer and Chief Executive David Maddan, to learn of the major conservation works completed in 2019, which established it as one of the best-preserved bishops’ palaces in Europe.

During the tour of the Castle Her Majesty and His Royal Highness met with celebrated Spanish artist, José María Cano for a preview of Saint Marcus – the first in a series of paintings of the Four Evangelists he has been commissioned to produce by Founder of The Auckland Project, Jonathan Ruffer.

Director of the National Gallery and friend of The Auckland Project, Gabriele Finaldi, then presented Jacob and His Twelve Sons; thirteen life-sized figures painted by Francisco de Zurbarán, which were brought to the Castle by Bishop Trevor in 1756 and have hung in its impressive Long Dining Room ever since.

The Queen of Spain and The Prince of Wales then travelled together to the Spanish Gallery, which takes its inspiration from Zurbarán’s series of masterpieces and their 250-year association with the town, and is situated in the market place.

A civic delegation including the High Sheriff Shona Harper Wilkes, Chair of Durham County Council (DCC), Cllr Watts Sterling, Chief Executive DCC, John Hewitt and the Mayor of Bishop Auckland, Katie Hewitt were all in attendance to welcome the Royal guests, who would later unveil a commemorative plaque to officially open the venue.

During their time at the Spanish Gallery, Her Majesty and His Royal Highness all met Adam Lowe, Founder of the Madrid-based Factum Foundation and Spanish art dealer and CEO of Colnaghi, Jorge Coll.

After signing the guest book, Her Majesty and His Royal Highness were presented with specially produced leather-bound Spanish Gallery catalogues by Otheay Wilson, aged 8, and Kadie Searle, 11 – both from St Wilfred’s RCVA Primary School and their Deputy Head Teacher, Brigit Kinsey.

The Queen of Spain and The Prince of Wales then left the Gallery and were greeted by around 250 local schoolchildren and people from local business in the town who had gathered to give them a warm farewell, cheering and waving British and Spanish flags.

KS2 pupils from Prince Bishops, Witton le Wear, Copeland Road and St Wilfrid’s RCVA primary schools were invited to play a part in the special occasion, an opportunity to gather together in celebration after the pandemic.

Jonathan Ruffer, Founder of The Auckland Project, said: “The creation of an Old Master Gallery from nothing is something that has not been attempted since the war. It requires a strong team, a beady and acquisitive eye for the Permanent Collection, and appropriate buildings in which to house them; it unites the spirit of Spain with the soil of England.”

“It is therefore a wonderful moment to have The Queen of Spain, and HRH the Prince of Wales together to celebrate and mark this occasion – they will, I am sure, be the first of many people to enjoy the fusion of our two great cultures.”

“It was particularly lovely to introduce members of staff from across the organisation, including our new apprentices and those directly involved in the vital work The Auckland Project delivers within communities in and around Bishop Auckland.”

“We also loved seeing so many schoolchildren coming along to be part of this special occasion for the town before giving our Royal visitors a rousing send off.”