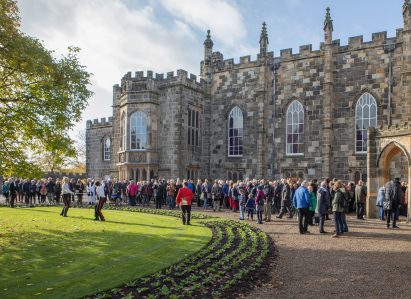 More than 1,000 people joined in a day of celebrations at Auckland Castle today, as the historic site opened its doors for the first time in three years.

The 900-year-old Castle, once home to the powerful Prince Bishops of Durham, has re-opened following extensive conservation work, led by regeneration charity and visitor destination, The Auckland Project.

To commemorate the landmark moment, a sell-out crowd of residents from Bishop Auckland and its surrounding towns and villages enjoyed live music and entertainment at the Georgian-themed Auckland Castle Community Day.

A ceremony was also held, with speeches from Jonathan Ruffer, Founder of The Auckland Project and Tiffany Hunt MBE, Chair of the Committee for the North of England at The National Lottery Heritage Fund. Mrs Sue Snowdon, Her Majesty’s Lord-Lieutenant of County Durham, also spoke before cutting the ribbon to officially declare the Castle re-open.