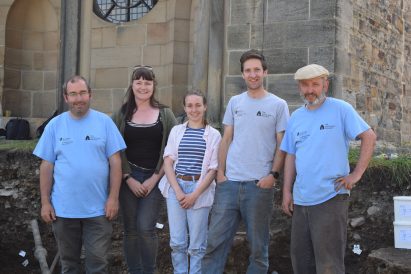 New archaeological discoveries at Auckland Castle have opened a window into the lives the Prince Bishops of Durham from the food they ate to where they went to the toilet.

Students and archaeologists from Durham University, working alongside our staff and volunteers, have excavated an area to the north of the site’s St Peter’s Chapel, which previously served as the Castle’s Great Hall.

There, they found evidence of medieval meat and fish, ingredients likely to have been sourced from the local area, and served on the menu at grand feasts in the banqueting hall for the Bishops and their guests.

The animal and fish bones were unearthed in a medieval rubbish dump, exactly where they would have been thrown centuries ago by those working in the Castle’s kitchens.

Structural excavations at the site have also revealed the remains of a parlour and a medieval latrine, or ‘garderobe’, which is likely to have been used by the Bishop of the time, as well as the impressive size and scale of the Castle’s walls.

And on 19 September, Durham University Archaeologists will be giving a special talk at Auckland Tower, about the excavation and the discoveries made.