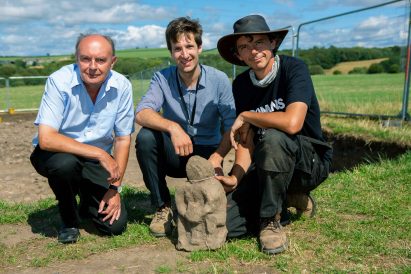 County Durham’s largest Roman fort has attracted archaeologists and volunteers from across the globe for the first in a new series of excavations.

Dating back to the first century, the seven-hectare site at Binchester Roman Fort, near Bishop Auckland, is believed to have once housed several cohorts of Roman soldiers along with units of auxiliary cavalry.

During the course of a six-week dig, more than 60 volunteers from as far afield as California joined forces with UK archaeologists to focus their attentions on the northern end of the site, which has been left largely undisturbed over the centuries.

The dig revealed a well-preserved Roman road leading out of the north east gate, with evidence of small-scale industrial buildings from the late Roman period on either side.
Hundreds of fragments of Roman pottery were also excavated, alongside smaller items such as pieces of jet, a copper alloy statuette thought to be of Mars the Roman god of war, and a carved stone image of what could be a Romano-British deity.

Run in partnership by The Auckland Project, Durham County Council and Northern Archaeological Associates Ltd. This latest dig was another significant step towards the long-term development of archaeological research at Binchester, with more excavations planned for the future.