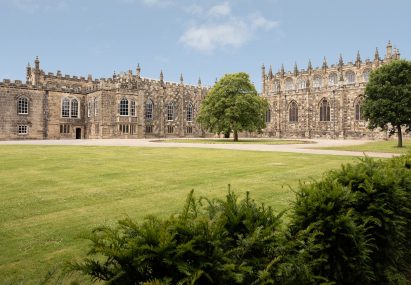 The Auckland Project has submitted a planning application to Durham County Council to transform a series of outside spaces surrounding Auckland Castle.

If granted, it will kick-start a three-year development programme, covering around 12 acres of land within the Castle walls, collectively known as the Castle Curtilage.

This includes the restoration of several historic features, including the Bowling Green and Bishop’s Steps providing access to the Walled Garden, as well as the creation of a number of new gardens and areas not previously open to the public, to enhance the visitor experience.

The scheme, designed in partnership with landscape architect, Pip Morrison, aims to re-instate some of the vistas that have been lost over the centuries, and establish a series of accessible gardens, each with their own character and routes that are easily navigable for all visitors.

This will sit in harmony with the work already announced to re-imagine the Castle’s 17th century Walled Garden, as both a functioning kitchen garden and a place of beauty within The Auckland Project visitor destination.

If planning permission is granted, work on the Castle Curtilage project is expected to begin in the summer, with further details announced in due course.