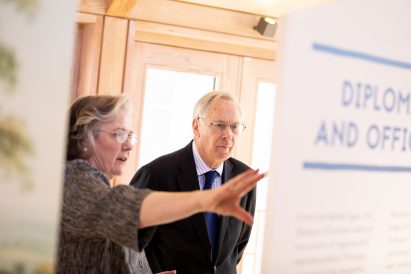 His Royal Highness, The Duke of Gloucester KG GCVO, made a welcome return to The Auckland Project this afternoon (17 September).

Accompanied by CEO, David Maddan and Chair of The Leadership Team, Jane Ruffer, The Duke toured the Mining Art Gallery, Bishop Trevor Gallery and Auckland Tower visitor centre, which were still under construction when His Royal Highness first visited The Project in 2017 and have since attracted more than 35,000 visitors.

His Royal Highness, who trained as an architect, was also given a preview inside Auckland Castle, which is due to open to the public on 2 November following a three-year conservation programme, supported in part thanks to National Lottery players via The National Lottery Heritage Fund.

To commemorate the visit His Royal Highness planted a tree in the Castle’s Walled Garden, which is currently under development, and was shown the sites of the forthcoming Spanish Gallery and Faith Museum, which will all open as part of The Auckland Project visitor destination in the coming years.